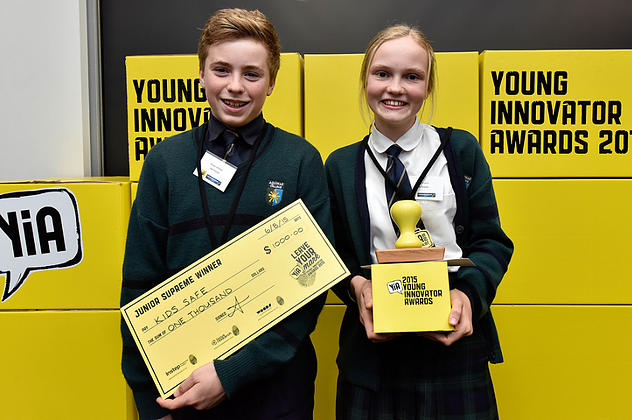 The best of the Western Bay of Plenty’s up-and-coming innovative minds were celebrated in 2015 at our Young Innovator Awards night in front of a crowd of 300 people at the ASB Arena.

Stacey Jones, YiA Project Manager said, “We were thrilled to have over 150 entrants for last year’s Young Innovator Awards. It was an incredible year with some hugely innovative ideas, from a spring back road maker, an app to help kids stay safe on their mobile, and a true testament to the creative minds within the Western Bay of Plenty. We’re hugely excited to see what creative ideas 2016 has to bring. We encourage you get innovating and check out www.yia.co.nz for more information.”

She designed gel cushion handles for crutches to prevent pain and bruising to the hands of those using them.

Young Innovators Awards is what inspired me to study product design at university. I loved the competition and winning the money was fantastic too. – Hannah

Hannah developed her idea during a two week internship and the output was so good, she has received enquiries from the local investors to further her idea. Watch this space!

The creator behind Spring Back Road Marker, Jaysha Tippins, recognised that the existing post edge makers that are used to create visibility at night are often snapped making it dangerous for motorists. She came up with a unique and eco friendly design that springs back into place if hit by a car.

After noticing quite a large amount of broken road markers on the side of the road, I wanted to look into how I could fix this problem, which would save money on replacement costs, as well as making it safer for cars in the dark, as the markers would stay firmly visible rather than broken in the side of the road. So with this in mind I worked on redeveloping a more efficient design for the roadside markers. I was so surprised that I had won. To hear my name called as first equal with Hannah was very exciting. I still have my winnings, which I have banked for future education. I am planning to head to university next year and the money won from last year will definitely help towards my study. – Jaysha

Aquinas College student Briar Patel took out the People’s Choice Award. With the self-imposed objective of designing an activity for students of Kaka Street Special School, Miss Patel decided to create an activity to help educate students in crossing the road safely, in turn, assisting senior students in becoming self-sufficient and better equipped to cope with independent living.

Technology is a subject dominated by males – I was the only girl in my class last year and I want to help try and change that trend. Technology is a growing subject and girls have so much creativity and innovation to give. I want to encourage the uptake of the study of technology and how it can help us all as much as possible. – Briar Patel

Fergus Lellman and Lucy Maher came up with the idea of Kidsafe, a mobile application that protects children from the perils of the internet by allowing the user to set their phone up in two different modes - parent or child to reveal different interfaces. The judges were extremely impressed by the maturity of the idea and the level of thought the students had put into it.

I believe that YIA has given me a better understanding on innovation and what it takes to innovate. To innovate all you need is your brain and a way to put your ideas down on paper. You can make a brand new product or improve an existing one. The best part about YiA is that you don’t have to be held back by what you can make and cannot make. By entering YiA you can get you innovation seen and possibly made. All you need to do is have an idea and be able to show others the same idea you have. – Fergus Lellman